Batman: The Cat and the Bat


Warning: Because of some of the example art, this review is rated NQSFW (Not Quite Safe For Work). We’re not talking pornography here, just brevity of wardrobe…
Batman: The Cat and the Bat 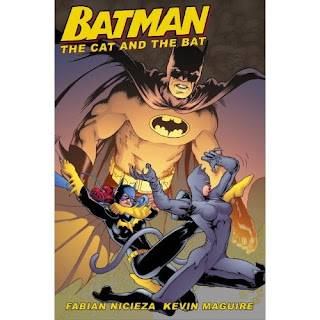 What’s It About?
Batman Confidential: a series exploring “famous firsts” in the Batman mythos that never really got around to happening but were just originally assumed to have done. In this case, the first meeting of Batgirl and Catwoman.

Batgirl: Barbara Gordon, daughter of Batman’s longtime ally Police Commissioner Jim Gordon. Too short for the police academy, she takes to fighting crime as Batgirl. At this point in her career she’s just starting out and won Batman’s respect a grand total of three weeks ago. She’s also stolen her father’s coded notebook to see what secrets it contains.

What’s Good About It?
The art… no, wait, we have a separate section for that, on to the writing.

A large part of the writing in this story takes the form of narration captions: a scrawled handwriting font on white for Barbara and an italic font on grey for Catwoman. The two sets of narration are used to complement one another, for instance in a chase scene that has Catwoman marvelling at Batgirl’s tenacious pursuit and Batgirl lamenting how tired she’s getting chasing all across the city after this woman. The story is genuinely, humanly funny with dialogue that rings true and characters reacting as normal human beings and not just heroic ciphers.

Each character in the story is well-defined by Nicieza who gives distinctive voices and motives to each player. Barbara is just starting out as a hero, keen to prove herself and most of all praying that she doesn’t screw up within sight of Batman. Sheer dogged determination not to fail keeps her going in her pursuit of Catwoman. Catwoman’s motives I can’t go into but her characterisation is top notch, Nicieza gives her a superior attitude and plays with the moral ambiguity of her heroic-villain persona.

Despite the title of the collection, Batman makes only a few brief appearances towards the end of the book and this really is Batgirl’s story. Following her as she powers through every obstacle is satisfying in itself but the intimate peek the narration gives us into her adversary adds a distinct edge to proceedings.

The book also contains several memorable set pieces, not least of which is a brief encounter between Barbara and the Joker which is tense and creepy despite, and perhaps even because, of the fact it only lasts for a single page and the Joker is no more than a pair of eyes staring out from behind a locked door.

What’s the Art Like?
Kevin Maguire has a real mastery of human anatomy and expression. Comics have a horrible reputation on this front: Adonis-like men with rippling muscles and six-packs everywhere accompanied by women of frankly unbelievable proportions. Maguire makes use of a great many body types in his work here and nowhere is this more clearly demonstrated than when a brawl breaks out in a nudist club.

Usually, this would not be a good thing. Usually I’d expect the artist to turn in bland softcore at best and dire pornography at worst. Nicieza and Maguire play the scene not only for laughs but Maguire populates the crowd of naked partygoers with a variety of realistic body types.

The following is the most work safe (ish) bit of nudity I can find and is included to demonstrate Maguire‘s anatomy work: 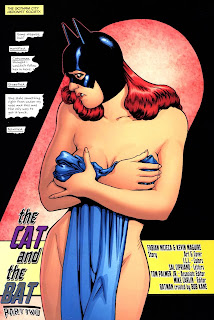 Notice the bitten lip. As you can see from that example, the art and the script really work together to drive the story’s humour. There's also much to be said for the realistic muscle structure Maguire uses, both here on Barbara and elsewhere. Take, for example, her arms, which have well-defined, toned muscles. Barbara has no superhuman powers, like Batman she's a detective and a close combat fighter. Where many artists (not naming any names) sacrifice this sort of realism for an "idealised" female form, Maguire realises how bloody stupid that is. You can imagine this woman with this body being able to fight. And so, speaking of combat situations, we come to artistic example number two: Barbara trying to get the notebook back from an intractable foe: 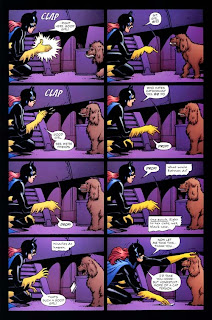 Awww. Just awww. This is a good example of what I pointed out before: the art and the script work together to compliment one another: the subtle changes in Barbara's expressions match the dialogue and her internal monologue. Visual storytelling is one of the great strengths of the comics medium and Maguire uses it to the full in building empathy between reader and character. We don't just have the narration telling us someone is tired or frustrated or annoyed, we can see the expression on their face. That the characters look like realistic people only helps this process of reader-identification and creates a very immersive story.

What’s Bad About It?
Whilst the exaggerated expressions of Maguire’s characters are half the fun of his art they can sometimes be a bit too comical. Frankly, every now and again a character’s face will cross the line into out-and-out silliness. You might also get the feeling here and there that Batgirl is trying to stifle a particularly violent sneeze, or perhaps that’s just me. It breaks the flow a bit, is the problem.

Finally, the Hedonist Club scenes, whilst not containing anything actually sexually explicit, do involve an awful lot of naked (if tactfully concealed) bodies including two nude, masked women grappling with one another. Therefore, I wouldn’t recommend reading it in your work’s canteen.