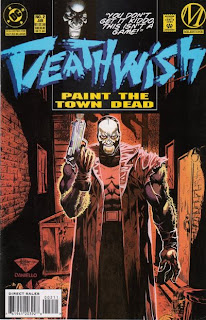 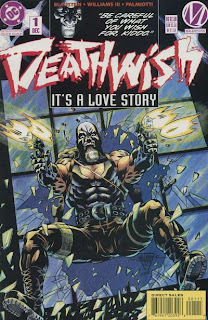 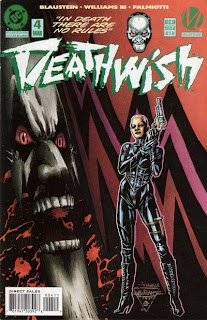 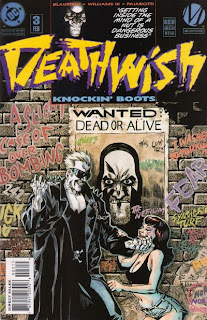 What's it about?
Marisa Rahm is a transgender cop in Dakota, America.  There's a serial killer, the Deathwish of the title, out there murdering trans women and Rahm is determined to bring him in. Rahm has been chasing Deathwish for years.  Her singlemindedness is all encompassing - she lives, breathes and eats the case.  Predictably, this is affecting her relationship with her girlfriend, Dini.

As Rahm gets closer to Deathwish he starts manipulating her, messing with her mind, and then it becomes unclear who is the hero and who isn't.

This is a four issue miniseries published under DC's Milestone imprint in the 1990s.  It has never been collected into a trade but it can be found in places such as Ebay.  Unfortunately I only have issues two, three and four of this series, but it's importance for trans comics characters means I am determined to review and promote it. 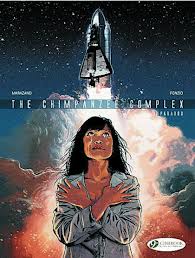 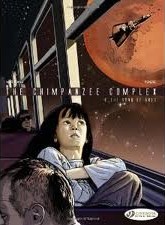 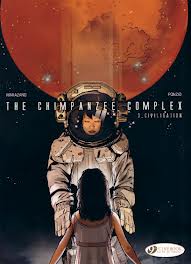 What's it about?
The Chimpanzee Complex runs over 3 books: Paradox, The Sons of Ares, and Civilisation.  It starts in 2035.  Helen Freeman is an astronaut and was going to be the first woman to set foot on Mars.  This was her life's ambition, so when the government cuts money to the space programme she is devastated.  Then a space module from the 20th century drops into the ocean.  As a trusted NASA employee Helen is sent to talk to the passengers.  What she is told seems impossible, a paradox. 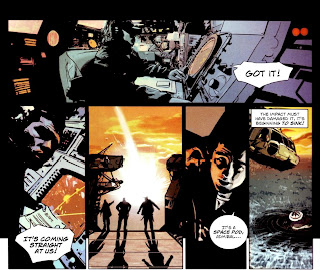 Meanwhile back home, her pre-teen daughter is wracked with anger and jealousy over her mother's commitment to her work, which she interprets as a lack of love for herself.

In The Sons of Ares Helen leads a mission to Mars to discover the truth about the space module.  They find the Soviet Base and more besides.  Back home, her daughter Sofia grows ever more angry and scared.

In Civilisation the mystery is unravelled.  Crew members wake up from an extended cryosleep and yet again reality seems wrong.  Pieces start falling into place and an understanding is reached.  Their survival seems precarious and Helen dwells on her daughter and what she may have lost.

The Chimpanzee Complex of the title refers to the stress suffered by chimps when placed in space.  The chimpanzees are intelligent enough to have a limited understanding of their predicament, and so they suffer extreme stress through being in an experiment over which they have no control.

I would recommend the Green Lantern titles over the Mr Terrific ones.  There are a few key DC titles they haven't yet included but I hope to see on sale over the next month.  These are:
Black Lightning Year One
Vixen - Return of the Lion
Suicide Squad - Trial by Fire

All issues are 99 cents (about 60 pence in English money) and can be read on your device of choice - ipad, tablet, iphone, android phone, laptop, pc, apple mac etc.

We have covered many comics with black characters, and you can see all entries here.  We've also done spotlight blogs on characters of colour in superhero and non superhero comics.  The final entry, which lists all previous entries, is here.

Posted by Saranga at 18:02 No comments: Links to this post