A couple of things to quickly bring to your attention:

DC Comics are having a 52 hour sale on their digital comics, which means you can pick lots of things up cheaply.  There are loads of titles that are accessible to the new reader.  Visit here and have a browse to find out more.  They also have a variety of comics available for free, so go along and check it out. :)

If you prefer Marvel superheroes, they also sell their comics in digital format. You can have a look at their online shop here.  Alternatively, I believe you can access them all for free if you are in a Starbucks!
Posted by Saranga at 20:53 No comments: Links to this post

What's it about?
Linda..
A human so self willed.. so drawn to darkness..
that her soul stands on the brink of damnation...

Matrix..
It is her purpose to life rebels up..
to bring them to the light...
If only she didn't hate them so....

So states the blurb on the back of the book.

This is one of DC's Elseworld's titles.  The term Elseworlds refers to books where the characters are "taken from their usual settings and put into strange times and places, some that have existed, and others that can't, couldn't or shouldn't exist".

This is the story of a Supergirl - not Clark Kent's younger cousin, but a character called Linda Danvers who bonded with a creature called Matrix.


Read more »
Posted by Saranga at 12:00 No comments: Links to this post

Every year, on the first Saturday of May, (May 7th this year, and in just a few week's time!) there is an event called Free Comic Book Day (FCBD).  This is exactly what it sounds like - an opportunity to get comics for free!

All you need to do is go into a comic shop, or other participating venue, (for example my local library takes part), and they will give a selection of free comics.  These free comics are ones specially produced for FCBD - in other words, you can't pick just anything from the shop and expect not to pay for it.

At the time of writing, comics being given out this year are as follows: 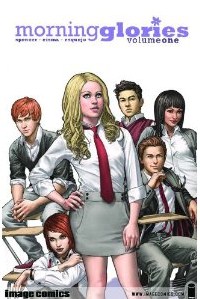 What’s it about?
Come walk with us into the halls of Morning Glory Academy.  We join six new students about to start at this impressive private school for the rich and talented.  However things seem a little odd.  The book’s opening chapter begins with a booby trapped exploding blackboard and ends the scene with a mysterious transparent hand feeding off a student’s head…

Oh yeah, Morning Glory is not your usual school.  The teachers have an agenda, the other students seem to be in on the plot and the six new attendees are soon fighting for their lives.
Read more »
Posted by Saranga at 12:00 No comments: Links to this post 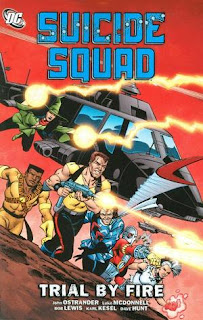 What’s it about?
The Suicide Squad are a motley bunch of (mostly) supervillains looking for a chance to get a government pardon by joining a secret government group, more formally named Task Force X.  Task Force X was first established in World War 2, the members names themselves Suicide Squad once they realised the sort of work they were being asked to do.  It’s not pretty, it’s not glamorous and it sure as hell isn’t safe.

Now, with a brand new roster, the Squad is sent on dangerous, politically sensitive and unpopular missions to deal with superpowered threats.  Members are utterly disposable and utterly deniable.  The formidable Amanda Waller, otherwise known as ‘The Wall’, controls the group, and she makes sure people do what she wants, when she wants, as she wants. 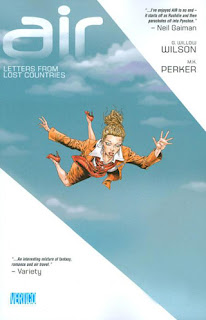 What’s it about?
The story of Air follows Blythe, a young woman who's afraid of heights but didn't let that stop her from becoming an airline stewardess.  As the story progress, we're introduced to a large colorful cast of characters and intrigues that might just turn a bit more dangerous than the skies itself:

Quickly, Blythe meets a very strange mysterious man, named Zayn (or is it..?), finds herself in the middle of terrorism plots lead by the Etesians, sky pirates/vigilantes and witnesses the discovery of the hyperpraxis, a new science, a revolution that might just change humanity's relation to technology itself.

Simply put, Air is a modern tale of myths and legends. As the story goes, the supernatural occupies more and more of the scene, fantasy elements enter and alongside this our main characters develop and grow. 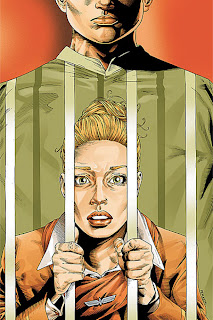 Comic - a book containing sequential art that can be printed in a number of ways.  Ongoing titles appear as monthly issues of 22 pages and are sold in specialist comic shops and online.  Monthly issues are also referred to as magazines, floppies and pamphlets.  These ongoing titles can be collected into trade paperbacks, graphic novels and collected editions.  They can also appear as original graphic novels, having never been sold as monthly issues.  Comics can be about any type of story or any genre.  They are not limited to superhero stories.

At long last, we present to you the glossary of comic book terms!  Listed in alphabetical order, this glossary will provide you with an explanation for comic book jargon.  If you feel something is missing or you want further explanation, please let us know.

Words in bold will have their own definition elsewhere in the glossary.

Today's review is brought to you by guest blogger naswho, who describes himself thusly: Student. Writer. Tutor. My role model is a fictional character, just like Yours. If you're reading this, you're reading my mind.

What's it about?
The Superman myth is a well known and popular aspect of modern comic culture. He’s the granddaddy of all superheroes, and is constantly being reinterpreted by writers and artists of various eras to suit the times. All Star Superman is writer Grant Morrison’s attempt to tell a timeless Superman story, one that exists within a continuity he’s created from across the varied eras of Superman’s publishing history and is both easily accessible to new readers and rewarding for anyone who already loves the Man of Steel.

I usually end up describing it as “What if Superman were God, except cooler?”
The basic thrust of the plot is that Superman, after rescuing scientist Leo Quintum from a failed mission to land on the sun, finds himself overloaded with solar energy. He’s reached the peak of his potential in his current form and is now dying. With only a year to go, the Man of Tomorrow sets out to try and save the world one last time, completing the adventures that will become known as his 12 Labors in the far future, and come face to face one final time with his archenemy, Lex Luthor.
The story’s a whimsical homage to every era of Superman, with a hefty dose of Silver Age charm and excitement thrown in for good measure. 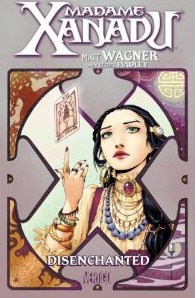 Today's review comes courtesy of Alexander Lyons.  Alex is a UK-based feminist theorist with a speciality in identity politics and poststructuralism in comics. He's got a weak-spot for Greg Rucka, Wonder Woman, and the obscure ramblings of Helene Cixous. You can find his own ramblings on Twitter. He has very curly hair.

What’s it about?
“There is a pattern in everything. Even the humblest speck of dust was once a mighty mountain. Seeing unlocks the patterns. And the tools of seeing are many…”

Madame Xanadu tells the story of Nimue; ancient and immortal daughter of the homo magi - a magical race of fairy living alongside mankind. She is the youngest of three sisters, and rival to her middle sister, Morgana, with whom she develops a conflict that spans centuries. Nimue is blessed with, among other things, the magical gift of divination, and uses her skills to predict and intervene in the fate of mankind. As the series proceeds, Nimue learns to use her powers to aid people in need, becoming a sort of supernatural heroine for people with extraordinary problems. 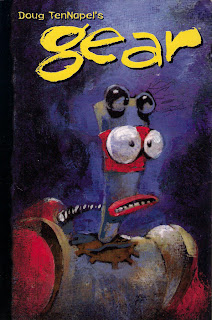 What’s it about?
Gear is a fantasy/scifi tale done by the very talented famous cartoonist Doug TenNapel.

Now, in case you haven't been introduced to TenNapel before, let me do it for you;
Doug TenNapel is an American cartoonist best known as the creator of the video game and cartoon character Earthworm Jim, which has now been turned into a very popular franchise. He has worked on various mediums over the years including cartoons, comics and games. He designed the look of the adventure game The Neverhood and worked on the Nickelodeon cartoon Catscratch, which was very loosely based on this very comic.
And most recently he worked on the internet live mini-series Go Sukashi! and Sockbaby. 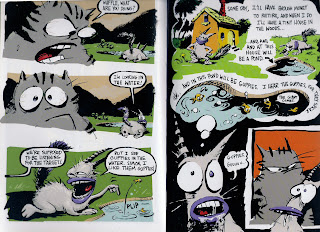 Gear takes place in a very unique fantasy world where there lives a lot of anthropomorphic animals.
There, the various factions (species) are in wars over their borders. The cats in the south are trying to expand their land, while the dogs in the north are turning their defenses into offensive forces. Meanwhile an army of insects is preparing to invade both.

The story follows a group of four cat "soldiers". Waffle, Mr. Black, Simon and Gordon. They aren't the smartest bunch of the cat troops but they've got heart and good intentions.  One time they happen to high-jack one of the Guardians - mysterious robotic totems in the forms of either cats or dogs.
But when things seemed to be going fine everything starts falling apart quickly... The troops are launched, the insects attack and our team gets caught in-between.

There's also a mysterious artifact everyone seems to be after called "gear" which seems to have strange powers over the Guardians and our cats befriend one of the insects, Chee.