Today's guest review comes courtesy of Dan Wright.  Dan is a writer of Manga and Fantasy, who currently has two books out. He also reviews part time on Read2Review and does what he can to help indie authors. Check out his website at the provided links:
Facebook and Twitter and his Website.

On with the review!


What’s it about?
Reynard City is the brain child of Will Turner, whose story tells of three superpowered foxes fighting for their lives on their homeworld of Animal Kingdom. Fighting against the villainous Mega Fox (a villain so badass that even Megatron the Transformers villain would cower before him), the start of the story throws you right into the action and doesn’t let up; until the foxes (and Mega Fox himself) find themselves teleported in Reynard City, amongst the humans.
Split up from each other and constantly hunted by their enemies, the team take on human personalities and now have to juggle double lives as both humans and crime fighters. 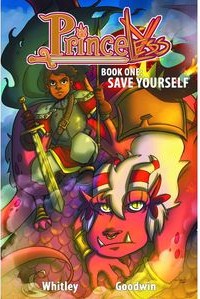 What's it about?
Princeless is about Princess Adrienne who lives in a land of fairy tale castles.  When the Princesses reach age 16 they are put in a tower guarded by a fearsome dragon, where they languish until a dashing would be Prince comes to rescue them.  It's traditional.  Apparently knowing which end of a sword to stick in a dragon is a fit test for kingship..

Adrienne isn't best please with this state of affairs, and after one particularly luckless knight turns up she decides she's had enough.  Chatting late into the night with Sparky (the dragon) they decide to abandon the castle, fake her own death and set off on a quest to save her sisters from their towers.

What's it about?
The Doom Patrol are the odd group in the DC Universe.  Members are typically thought of as freakish with strange powers.  They don't seem to fit in well or be accepted in other parts the superheroic or non powered world. Issues 64 to 87 are all written by Rachel Pollack after she took over from Grant Morrison, so Pollack is building on established continuity whilst carving out new stories for her version of the team.

This particular incarnation of the group has the following members:
Dorothy Spinner, a young teenage monkey-faced girl who can make her imaginary friends become real.
Cliff Steele, a man's brain in a robot body.
Niles Caulder, the boss of the group, previously a wheelchair user, now just a self-sustaining head.
Kate Godwin, a woman with coagulating powers
George & Marion the bandage people, made of sentient self replicating bandages.
Charlie, a living teddy bear with the head of a doll.

As for what they get up to, they live in a house full of the ghosts of those who died during auto erotic experiments.  There's a few issues dealing with Dorothy's powers and the dangerous beings she calls out of her head, there's Cliff trying to reconcile his humanity with his body.  There's wild girls and trickster gods using the Doom Patrol to settle old scores.  There's ideas about world building based on the Greek story of the teirasias and then it ends with a few issues exploring Jewish mysticism.  Throughout all this there are recurring themes of sexuality, gender and humanity - what it means to be you, and real.

So, you can understand that this isn't your typical glamorous superhero group.  The Vertigo imprint publishes adult, more mature (that isn't a byword for pornographic), more intellectual books than the regular DC titles.  So, when you combine that ethos with the Doom Patrol's premise, you end up with some really interesting work.