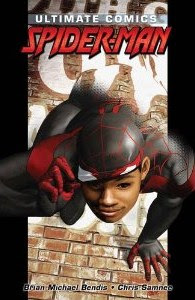 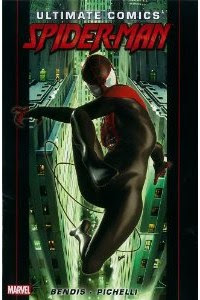 What's it about?
Spider-Man is, as the name suggests, a man imbued with spider related powers.  Most people recognise Peter Parker as the man under the mask, but this series takes place in Marvel's Ultimate Universe where things have changed.  In this universe Peter Parker is dead and everyone knows his secret identity as Spider-Man.

Now there is a new Spider-Man.  He's got a black and red suit and he looks younger than Peter ever looked.  He is Miles Morales, aged 13, African American and with quite a different set up to Parker.

Miles isn't in any way connected with Peter, so this isn't a case of a friend taking up the superhero mantle.  Although Miles got his powers the same way (bitten by a spider), his powers are different (it was a different sort of spider).  He can crawl up walls and has enhanced strength and agility, but unlike Peter he also has a venomous sting and can turn invisible, or at least camouflage into the background. 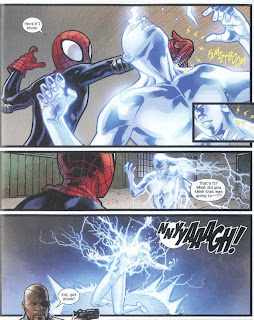 From volume 1, pencils by Pichelli

Volume 1 tells how Miles gets his powers and introduces us to his life and family and friends, and brings in other members of the superhero community with personal connections to Peter (they aren't always pleased that an unknown has donned the suit).  Volume 2 tells how he deals with his Uncle discovering his powers and trying to use Miles for his own nefarious ends (his Uncle is not a good person).

What's good?
This is a really great story.  Really great.  It's been years since I bought a regular Spider-Man comic, but after buying issue 1 of this I was hooked.  Miles is a very different sort of person to Peter.  He's not written as Peter Parker with a new skin colour.  Where Peter was mouthy and wise-cracking, making jokes and angsting about his dead Uncle, Miles is quiet, unassuming and fairly mature for his age.  Obviously he thinks his powers are cool, but he's also aware that having these powers puts him in a new situation.  How will he proceed?  Should he fight crime?  Should he tell his parents?  What does this mean for his life?  Does he have to join a team now?  What does he do next?  These questions are not answered over the course of the first 2 volumes - rather, I think they will form part of Miles's ongoing story and characterisation. 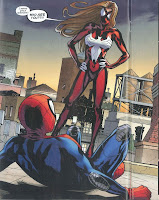 So what else is good?  Miles talks and acts like a 13 year old.  The first issue shows his attempts to get into a good school, to escape his crap neighbourhood.  He reacts to his parents, and converses with them and his friends differently.  His thought processes and outlook reflect his age.

The Peter Parker Spider-Man character has been around for so many years that sometimes it feels like writers have run out of new ideas or new ways to tell his story.  But with Miles being a completely new character it feels like the creators are really invested in giving us a new, engaging story, and giving Miles a solid place in the Ultimate Marvel universe.  It's refreshing.

Lastly, and on a more political point, the letters page of the comic frequently publishes correspondence from younger fans, about the same age as Miles, saying how great it is to see a new character like him - their age, and their ethnicity.  It is important for people to see themselves reflected in the comics they read, and Miles is as good a role model as any.

From volume 1, pencils by Pichelli

What's bad about it?
I find the second volume less engaging than the first because it focuses on Miles's relationship with his Uncle, who I do not find particularly interesting.  The series is definitely being written as an ongoing story, not as a collection of individual arcs, so it can be said that the comic at times feels a bit slow moving.

What's the art like?
Volume 1 is drawn by Sara Pichelli with colours by Justin Ponsor.  The pencils and colours aren't anything special but the way in which the panels are laid out, and the perspectives Pichelli gives on each scene, are what makes this special.  She is equally capable of telling the story through guiding us through interconnected panels, and giving us panels which seem to be freeze frames of the action.  She's got a wonderful way with expressions and body language, as seen in these panels: 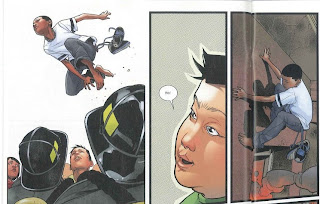 Volume 2 is drawn by Chris Samnee and David Marquez with Justin Ponsor still on colours.  Samnee has a harder style than Pichelli, but does seem to ape Pichelli's layouts.   This means the two volumes feel part of a bigger whole so the storytelling isn't interrupted.  These two scans are of panels by Samnee: 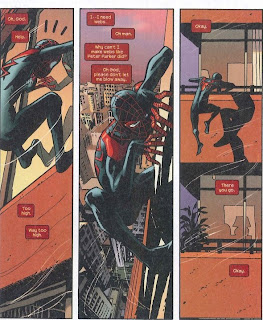 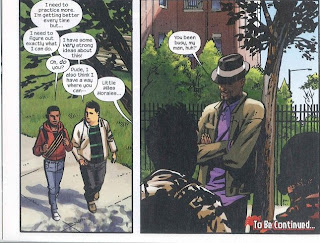 Of the two, I prefer Pichelli's work: I think it feels more graceful and gentle.  Marquez is somewhere between the two, as seen in the following two pieces:

Both volumes give us plenty of insectile, classic spider-man poses and wall crawling, and visual jokes: 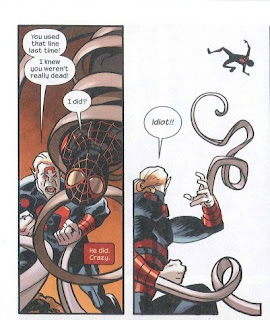 From volume 2, pencils by Samnee
I love the panel on the left.  The layouts of the characters and lettering, the facial expressions (on both Spidey and Red Omega), and the positioning of each character turn it into a funny panel.

Miles Morales is also starring with Peter Parker in the mini series Spider-Men, where a dimensional rift means that the Peter Parker of Marvel's main universe gets transported to the Ultimate universe, and the two web heads meet.  As of writing we are three issues in and it's massive fun.  You can buy these issues on comixology or at your local comics shop.  The series is being written by Bendis and drawn by Pichelli.
Posted by Saranga at 12:00