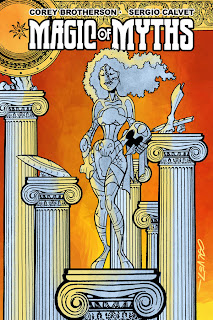 What's it about?
This book is about Eve, a schoolteacher who is transported to a mythic fantasy world where she has to undergo certain ordeals and retrieve valuable artifacts before she is allowed back to her own world.   She doesn't know why this is happening, who's in control of it, or even where she really is. As the Magic of Myths website FAQs explains, Eve has magical armour which can create weapons for use in her ordeals.  The sidekick/guide role is filled by a cranky creature called Tinkantankerous.  Eve's ordeals force her to consider her life thus far and her worth as a person. 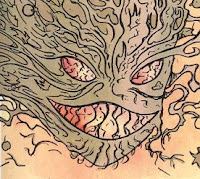 The story is framed against - and references - many famous mythological stories: A Midsummer Night's Dream, Perseus, the Greek Sirens, Peter Pan.  Expect to find both overt and subtle markers for these throughout the text.

What's good about it?
The hero-undergoing-trials plot is a fairly standard trope, but this feels new and modern.  Eve is black and uses a stick to walk.  There are no long winded fantasy speeches, no thous and thees, no posturing, no saving the world rubbish.  Eve talks like a normal person, swearing and all.  She makes mistakes, references pop culture (well, Joss Whedon), and is a little put out by having to do all this stuff - although I also get the sense she enjoys it too.  She's not upset about having this hero's journey thrust upon her, she deals with it pragmatically with minimum fuss. 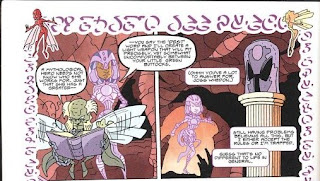 Magic of Myths feels like it's been written from the heart, like it's really important to Brotherson, and so it's a surprisingly thoughtful and contemplative book.  I say surprising, because the art is quite cartoony and if you just swept your eye over the page you would probably think this was a simple, lighthearted read - but it is far more than that. 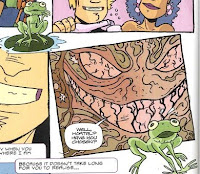 What's bad about it?
When I first read this I was thrown by the sudden introduction of the villain.  On a re-read, it works more seamlessly.  There are a lot of questions raised in this book, so I wouldn't say it was a standalone story.  It definitely needs the next season (out in 2013) to complete it.

What's the art like?
Eve is very stylised.  She fits the traditional superhero mould - tiny waist, exaggerated hips and breasts, but it doesn't feel sexualised.  She's not drawn in back breaking poses and she's not (often) drawn to titillate.

The art reinforces the mythic elements, especially the imaginative panelling done by Sergio Calvet, seen in the images throughout this post. There are some phenomenal page headers and footers around the story of Eve's last trial that I've never seen in a comic before.  He's very, very good at silhouettes.  That sounds simplistic, but it's not.  Calvet combines them with really strong colours so the whole panel becomes a freeze frame of the most beautiful, strong or dramatic moment.

(Apologies for the bad crop of the second panel - I wasn't paying enough attention when I scanned it.)

More information
You can read the first 3 issues of Magic of Myths on the website here.
The book is pretty small - only A5 sized, and at the back of this collection is a sketchbook and behind the scenes section.  Also available is a 2013 preview book, giving extra tidbits and sneak peeks from the next collection.

If you want to read more by these creators, both have websites:
Corey Brotherson's is here.  Corey also wrote Clockwork Watch which we recently reviewed.
Sergio Calvet's website is here.  He has a few webcomics.

If you like this you should also check out Princeless which is my other favourite modern-take-on-fairy-tales-and-mythic-stuff comic.

For other fairy tale and mythological themed comics please click the links below:
Fairy tales
Mythological 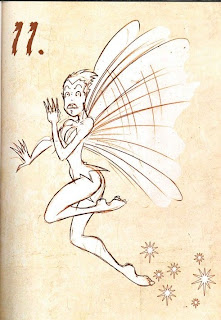 This is art from one of the chapter breaks in the book
Posted by Saranga at 12:00