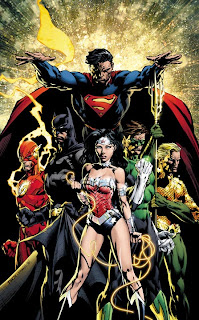 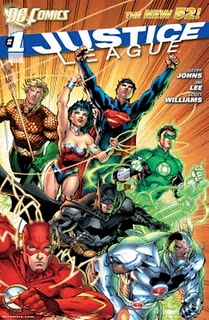 Regular cover on the left, variant cover on the right.  We recommend you buy the regular cover so you can avoid looking at a deformed and pin headed Wonder Woman.  The inside of the comic is exactly the same, just the cover is different.

What's it about?
It's the introduction to the new DC Universe.  In an attempt to boost sales and attract new readers to their books, DC Comics have recently undergone a relaunch.  Lovely, this is just the sort of initiative we approve of at New readers...start here!

The story is set 5 years in the past, at a time when the Justice League, DC Comics' premier team of superheroes, is just forming.  It is part of an ongoing story arc, which will probably be spread out over 5 or 6 issues.  This means this issue is just the first part of the story.  Apart from that I will tell you nothing else as it's only 26 pages long and I want to avoid spoilers.

What's good about it?
It's the very first of the relaunched DC books so everyone, long term reader or new reader, is at the same starting point.  Absolutely no prior knowledge is required.

The book itself is fun, it's energetic.  The heroes, apart from a cranky Batman, seem to enjoy being superheroes.  This is joyous.  The characters are having fun.  I mean, if you had these guys powers wouldn't you be thrilled?

If all you know of DC's superheroes is the films, you'll recognise the characters here.  If you haven't seen the films, don't worry, personalities are well defined and distinct.  It's a well paced action story and it's done what it's meant to, it's hooked this old cynic back into the universe and made me look forward to the upcoming books.

What's bad about it?
Ohh you know, I think this is a great little book.  The dialogue is entertaining, it's well plotted and it's fun.  I've nothing to complain about, particularly not from the perspective of a new reader.

What's the art like?
Well, I was going to show you a splash (double page spread) of Batman, but then thought it would be better to just show the first page.  Less spoilers that way.  The art is like this: 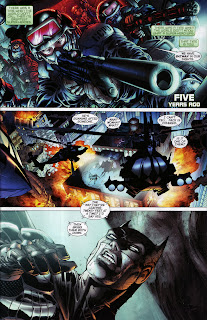 Check out Batman's stubble!  He's a bit moody and a bit growly, he inhabits a dark and grimy world.  See him be cranky.  Ok, so I'm mocking him a bit here, but I do love to do that.  Anyway, the rest of the art is in this style - intense, dramatic and action packed.  In places it's heavy on the shading, in others it's really quite colorful.

Other information
This comic is available in hardcopy and electronic formats.  You can buy the hardcopy from your local comic book shop or you can buy an electronic copy from comixology.  It's $3.99 (American) or £2.49 (British).  Justice League will be released monthly, you can see the release dates here.  if you want to read more of DC's relaunched titles you can read the solicits on their website here.  All books will be released in hardcopy and digital format on the day of release.