Edit - Since writing this review the comic has changed it's name from Little League to JL8.  Info in post is now updated.

What's it about?
JL8 is an all ages webcomic that takes DC’s premier superhero team, the Justice League of America, de-ages them, and places them in primary school. They attend in costume, and in character, bicker, make friends and encounter vile adversaries such as PE teacher Darkseid!

What’s good about it?
It’s told in strip format, with a few panels to each entry, so in order to tell a joke and provide an emotional connection to the strip, each character’s personality is boiled down to a few simple points. 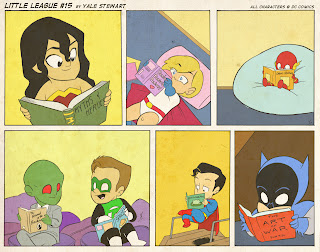 Superman is optimistic and innocent, Batman is grumpy and solitary, Green Lantern is a bit stupid, Flash does everything at top speed. Power Girl is for some reason a bit ditzy, Wonder Woman is by far the most mature of the lot and J’onn J’onzz is the outsider.

It’s a really simple method of storytelling but it works very well. The gags are funny and the drawings are cute. It’s ideal reading material for young kids and a good way to introduce both kids and adults to the essential themes and basic characterisation of the Justice League.

At the time of writing there are only about 40 strips so it won’t take you long to read, and to be honest there’s not a lot, plot wise, that has happened so far – the biggest things that stick in my mind is Batman getting the hump because an old lady they rescued referred to them as boys not men, leading to a face off with their villains in the playground. Power Girl seems to like my little ponies and there’s a very fun dig at DC’s recent costume changes. 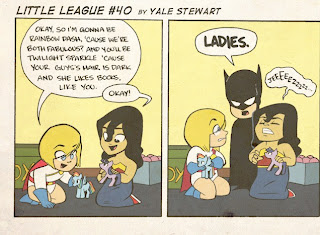 
It's fun and lighthearted and well worth checking out.

What’s bad about it
The webcomic is posted on a tumblr, so unless you go to the archive and read through that way (a facility which isn’t immediately obvious when you scroll through the blog), it can be a bit difficult to read the strips without clicking on them to enlarge each one. It’s not a big problem, it’s just a bit annoying.

What’s the art like?
It's very cartoony. The characters have big heads and skinny bodies. The colours have been given a muted look, so combined with the panel borders this webcomic has the look of an old fashioned newspaper strip comic. It’s a nice effect which adds to it’s charm. The lettering, not something most people are concerned about, is superb and really does it’s job of adding to characterisation and plot.  For example, Flash is a speedster, so he's impatient and can speak really fast, giving us this:

Annd then there's this, where Batman, Superman and Green Lantern are all puffed up with bravado and Wonder Woman sees right through them.  Not Power Girl though... 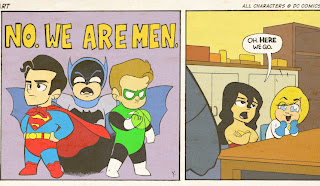 If you like this, may I also recommend Batman and Sons, by The Black Cat, viewable on blogger and on deviantart.  It's got a similar feel and sense of humour to it.

Images kindly used by permission of Yale Stewart.
Posted by Saranga at 12:00