Love as a Foreign Language


Love as a Foreign Language 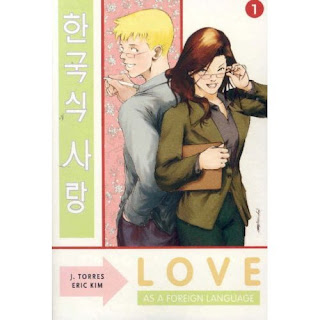 What’s It About?
Joel: a Canadian graduate teaching English as an additional language in Korea and hating every minute of it. The first chapter opens with a brief narration examining culture shock as one of the natural stages by which a person adapts to another culture and then presents us with Joel. Joel is a man seemingly trapped (perhaps by his own design) within his own culture shock, as he tries to decide whether to stay in Korea for another year or return home to his own culture and sanity.

And then the school hires a new secretary, Hana, and his decision gets that much harder…


What’s Good About It?
The best way to describe Love As A Foreign Language is “charming”.

Actually, no, that’s a bloody awful way of describing it so let’s qualify that statement. Joel is a character built for pure comedy. He’s a born sufferer: even after a year in Korea he can neither speak nor read the language beyond a few simple phrases, he can’t stomach and even fears Korean food, most of his friends are his fellow (English-speaking) teachers and he knows little of Seoul apart from his apartment building, the school and the bar he and his friends drink in after work. Just to rub salt in the wound, Torres’ script points out the one thing Joel needs to do to make his life easier on the very first page.

There’s no way around it: the humour of this story is based on Joel’s ignorance. Whilst by no means a bad person, his ignorance of Korean culture is wilful. He is consistently shown to shun the local culture, rarely socialising beyond his fellow teachers Donnie (a Korean-American) and Kelly (an Englishwoman). In one of the series’ best-played scenes, his own students Janet and Britney deliver him a lecture on dating in Korea. His isolation is clearly of his own making but he never manages to be unlikeable, just a bit stupid.

The story is carried by two things: the dialogue and the art. The art we’ll get to later but first I just want to say that the dialogue works really well. Each character has a distinctive voice,with rhythms that the reader picks up on over time. Torres even manages the rare trick of making a character’s poor English seem realistic rather than just using it for cheap comedy: dropping clauses, plurals and pronouns from otherwise structured sentences in a way that rings true. There are running gags aplenty from Donnie’s verbal diarrhoea to a small group of Korean teachers (Miss Park, Mrs Park and the other Mrs Park) who are always found together , as well as plenty of social situations for Joel to humiliate himself in.

The reader’s interest is held by the bits and pieces of Korean culture that are revealed as the book progresses. Suddenly interested in a Korean woman, Joel becomes more prone to socialising beyond his immediate circle and we are introduced to Korean culture as he is (including the aforementioned humiliating lecture from Janet and Britney). Its an examination not just of this man opening himself up to the new experience of a relationship but also of an entirely new culture, all mixed together into one plot.

What’s Bad About It?
There’s a language trick played for effect that comes across as annoying rather than clever. In most English language comics, other languages are portrayed using speech written in English but bracketed (i.e. “{Kill the American!} 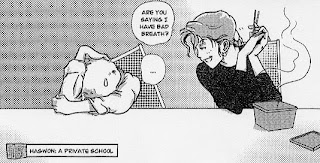 … so its good that Kim is so accomplished at drawing expressions. His art has a lot of visual humour that adds to Torres’ script. It really is worth taking a moment just to look at the art to see how much expression Kim can create from just a few lines. The art is black and white with grey-scale colouring, which is black dots of varying size and patterns to give the illusion of differing shades. Like the line art itself, the “colouring” is simple but effective and doesn’t really need to be more complex.

The original six short-form issues (about 70 pages each) are still available but only worth looking for if you can get a good deal on them used.
Posted by James Ashelford at 18:00